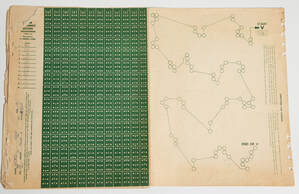 Donation Details
​
This aptitude assessment was donated by longtime MOTAL supporter Fred Lentz, who completed the test at age 14 on October 3,1957. Fred became a renowned educator who taught high school for 35 years, earning the Orange County Teacher of the Year award in 2002 among many accolades. Upon his retirement, Fred helped found Advance! On to College, a nonprofit organization that helps students prepare for and apply to college, with all services free of charge. Their mission is to  provide “equity of access to college for students primarily from low-to-moderate income families with no prior experience with college. Advance! seeks to level the playing field for these students and families.” (http://www.ontocollege.org/)
​
Background
​​
This test was published by Science Research Associates (SRA), a Chicago-based publisher of educational materials best known for its reading comprehension products. SRA became immensely popular in the late 1950’s as it published the first widely available differentiated reading assessment tool, the SRA Reading Laboratory Kit, which allowed students to work at their own individualized pace and level. Differentiated instruction is now accepted as a best practice, while standardized tests incite debate around bias and equity.

The first known aptitude tests were developed by Sir Francis Galton in the late 19th century to measure intelligence. Alfred Binet applied Galton’s technique to his own work to develop the Binet Intelligence test in 1905 which was used to determine which students would most benefit from public education, with the intention of directing public funds toward students with the most potential. Commissioned by the French government, Binet and his colleagues later developed the Binet-Simon Scale to measure cognitive ability in children. In 1908 Henry H. Goddard brought the test to the United States, which Lewis Berman later adapted at Stanford University in 1916 to create the Stanford-Binet test. That test, now in its fifth edition, continues to be one of the most widely used intelligence tests in schools today. Such tests, however, have been criticized for
possible bias toward the culture and environment in which they were developed.

If you are interested, there are many versions of these tests available for free online. Just remember, these tests should be considered in the context of many other factors and possible confounding variables.