Artifact Collection > Outside the Classroom

​​Brief History
​
As a developmental cognitive and clinical psychologist, it particularly amazes me how children invent the games they play in their development of becoming socialized. Playing marbles is considered one of the oldest games in the world played by children. It goes back to Greeks, Roman and Egyptians of ancient civilizations playing with nuts or fruit pits. Octavian as a young boy who was later the emperor Augustus, played with nut marbles. In the tomb of the young Egyptian pharaoh, Tutankhamen, marbles were discovered. Jewish children use filberts as marbles at Passover, and engraved marbles were found in Mohenjo-Daro and some Native American tribes.

Marbles were commonly made of clay, stone or glass. In 1884 Sam Dyke invented a wooden block with six grooves in Akron, Ohio to produce a million clay marbles per day. The first glass marbles were made by Martin Frederick Christensen, also from Akron. Soon Akron became known as the marble capital.

Marbles are described by their shapes into three categories.

1) “aggies”, which are made of agate stone;
2) “alley” made of alabaster and are larger to be able to knock the smaller marbles;
3) “onionskin”, German handmade marbles with swirls of layer color. These marbles are the most valuable and are identified by a tiny scar or pontil mark identifying the cut from the glass rod.

Jean Piaget described age, developmental stages in children’s approaches to playing marbles. Before the age of four there is no game behavior, but after that age a child knows how to make the right moves physically and will take turns, the social aspect of the game. The child can imitate what the older child does, but there is no real sense of strategy in how to increase the likelihood of winning. By age eleven he/she can explain every rule and every exception but does not yet grasp rules as rules. However, by thirteen the child understands that the rules are arbitrary and conventional. 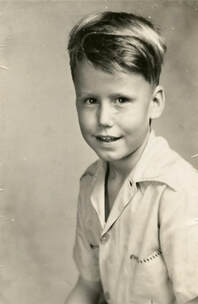 I am donating part of my husband’s (N. Fred Brannock) youthful winnings of marbles to the Museum of Teaching and Learning. Fred grew up in a small town on the Eastern Shore of Maryland, Cambridge to be exact. He played marbles on the playground of the Peach Blossom Elementary School, which was across from his family home. He was a “sharpshooter” winning an amazing horde of marbles which his parents stored in pretzel tins and stacked in the back shed. Fred said that his younger brother, Ron, was jealous of him and claimed that he was the one who won all the marbles. In order to settle this disagreement between the brothers his mother gave one can of marbles to each of them. I got this account from Fred’s funny distorted stories of family life in Cambridge which he wrote and, also illustrated using Photoshop. I will always treasure these stories.