MOTAL is the proud owner of a Cram’s Scope-O-Sphere 12-inch world globe from the 1950s. Globes are used in classrooms to illustrate Earth’s shape, show where we live, and indicate where other regions of the world are located. Students interact with globes to learn about the vastness of Earth beyond their neighborhood or town and see that they are part of a larger world. Modern technology allows for increasingly informative and interactive globes. 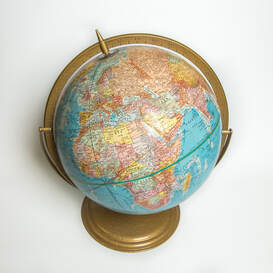 Brief History
​
More than 2,000 years ago, Greek philosophers knew Earth was round. The earliest globes depict a spherical Earth. Aristotle made astronomical observations of the circular movement of the stars. Around 240 B.C.E. Greek mathematician and astronomer Eratosthenes became the first person to calculate Earth’s circumference and tilt. He also developed a grid system for dividing Earth into five different climate zones with placement of parallels and meridians still used on maps today. From that point forward, advancements in cartography looked for ways to depict a more accurate three-dimensional model of Earth. In the 2nd century B.C.E., a Greek philosopher, Crates of Mallus, made the earliest known globe portraying four continents with large rivers and oceans between them. The oldest globe that still exists today was designed and constructed in Germany by Martin Behaim in 1492. It does not include the Americas at all.

In the 15th and 16th centuries, as navigators from numerous countries began exploring the world and maps became more accurate, globes became more relevant. By the 18th and 19th centuries, blobs were used in classrooms, and numerous versions were created for children and adults including political divisions and geographic descriptions of Earth. Globes produced today are mainly mass-produced and based on satellite imagery of Earth to ensure accuracy.

The George F. Cram Company was established in 1867 in Illinois by George Cram and his uncle, Rufus Blanchard. At first they produced maps and atlases, and then in the 1930s they began to manufacture globes for both home and school use. The company continues to produce “home educator maps and programs, educational globes and maps, cultural and historical maps, state maps, curriculum material for the classroom, and social studies materials, including CDs, videos, and atlases.”


​​​Acquisition
​
MOTAL’s globe was purchased in 2010 through an online resale source. That is unusual, for most MOTAL artifacts have come through the generous donations of individuals.
​
Learn More!
​
If you would like to learn more about the globe, we recommend the following: