Notes on Balance Scales and the chainomatic
​by dr. Richard Deming

​A “balance” is a device that determines the “mass” (or “weight”) of an object, usually by comparison with known masses (or “weights”).

“Weight” is common term that represents a measure of the gravitational attraction between two objects, but “mass” is the quantity of a substance, independent of where it is.  Suppose you “weigh” yourself on Earth with your bathroom scale and you weigh 120 pounds.  If you took that scale to the Moon, you would weigh only 20 pounds because the Moon’s gravity is only 1/6th that of the Earth.  However, your “mass” would remain the same:  you don’t suddenly lose mass by taking a rocket to the Moon!
​
Mass is easily determined using a “pan balance” as shown in the following figure.  If an object, such as a stone, is placed in the left pan, the left pan will move downward and the arrow will point toward the left.  The pan can be returned to its original position (with arrow pointing straight up again) if you place a set of known masses (or “standard” masses) to the right pan until the arrow points straight up again.  The total mass of the standards exactly equals the mass of the single stone. 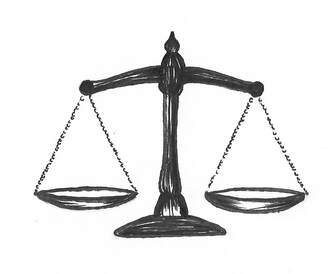 NOTE:  If you took the pan balance to the Moon, you would get the same mass of the stone as you did on Earth because both the stone and the standard masses would “weigh” less by the same amount.

One of the biggest challenges for determining the mass of very small amounts of a substances used in scientific research is handling a set standard masses in the range of 0.00100 grams, or 1.00 milligram (mg), as well as being able to accurately assess when the arrow is in the center upright position.  For example, a “low-dose” aspirin is only .081 g, or 81 mg, so imagine how small your standard weights would have to be, and how carefully you would have to handle them and keep them clean, let alone see when the center arrow is in the exact upright position.

Special mechanical systems have been devised over the years to allow for this determination of very small masses, and the “Chain Balance” (Chainomatic) in the MOTAL museum collection is one example.  The original design was patented in 1915, but the model in the photo was widely available in the 1950’s. 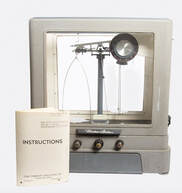 ​In this case, after an approximate mass of an object on the left pan is determined using large standard masses added to the right, the addition of very small masses to the right side is accomplished by lowering portions of the hanging “chain” to achieve a balanced position, and using the “Vernier” scale to read accurately the final total mass needed to achieve “balance.”  The glass doors are needed to prevent air currents from disturbing the pans inside.