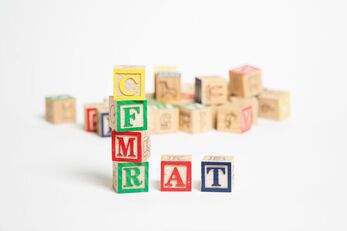 Alphabet blocks are an interactive learning tool for young children and are used in play to build words and practice letter recognition. The blocks pictured here show colorful letters as well as different styles of the same letter and depictions of animals or foods that start with the respective letter on the other sides of the block. Pictures of animals, food or objects that begin with each letter are put on the blocks in order to reinforce letter recognition through association.

In 1693, John Locke said that learning would be more fun if “dice and play-things, with the letters on them to teach children the alphabet by playing,” were used. Around that same time, alphabet blocks were created. In the early nineteenth century, wooden shapes often with letters depicted on them– called Froebel’s gifts– were created by the founder of kindergarten, Friedrich Wilhelm August Froebel. Froebel’s gifts along with homemade blocks matriculated through preschools and playrooms at home. In the mid-nineteenth century, S.L. Hill, a U.S. manufacturing company, was among the first who patented the blocks.


In 2003, Alphabet blocks were inducted into the National Toy Hall of Fame. Nowadays, we find brightly colored alphabet blocks for purchase in toy stores and online and scattered on the floors of our preschools as children play and learn.

Learn More!
Seven East at Home Activities with Blocks
Read about our 1940s Spelling and Counting Board here.