The Adler typewriter in this photo was donated to MOTAL by Barbara Park of Stanton in 2013. Barbara was battling ovarian cancer at the time, yet she was determined to place her valued possessions in new homes. She put out a call in the local newspaper for letters from those who were interested in the typewriter. Barbara decided that Greta Nagel’s letter about housing the typewriter at MOTAL where it would be appreciated and enjoyed by visitors of all ages was compelling. Her beloved typewriter is now one of the museum’s vintage teaching tools.
​
Learn how MOTAL was lucky to receive a treasured typewriter for its mini museum (November 26, 2013.)
To read the article go to: Woman Hoped for One Letter; She Got 50 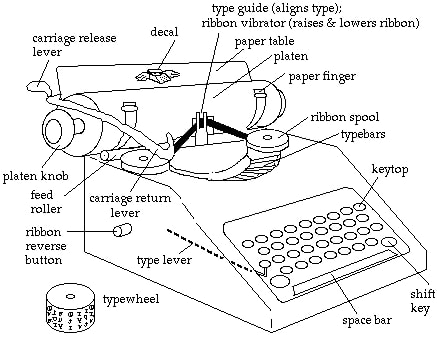 The typewriter rests on a table, and the user, called the typist, sits facing the keyboard. When the typist’s finger pushes a key, the action moves a short metal lever. That, in turn, lifts another metal lever called a hammer that has raised letters on the end.

One by one, hammers hit the inked typewriter ribbon, and leave printed impressions of the letters on typing paper that’s been wound on a roller. The roller is on a moveable carriage that advances so that letters only strike one at a time making words. A typist hits a space bar each time empty space must come between two words.
With lots of practice, typists can train their fingers to hit assigned keys, even when they are not looking. This is called touch typing. People who compare typing on a typewriter to typing on a computer say it takes a much harder strike to push typewriter keys. Even so, a good typist could type more than 40 words per minute.
Do YOU have a typewriter tale to tell?? We would LOVE to hear it!!
Email motalnormaames@gmail.com
Learn More!